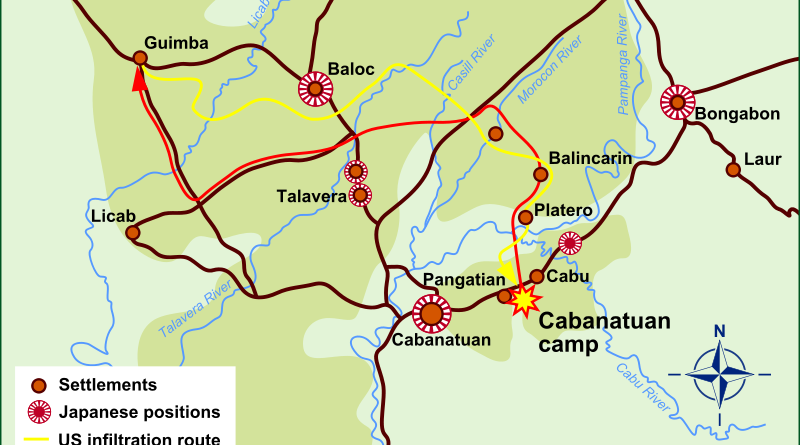 In the Pacific Theater of Operations, the 6th Ranger Infantry Battalion had its beginning in the 98th Field Artillery Battalion. Activated in January 1941 at Ft. Lewis, Washington, the 98th served in New Guinea and was at Port Moresby as part of the Sixth Army under the command of Lieutenant General Walter Krueger. Deciding to create a larger force to accomplish the same type missions as the Alamo Scouts but on a grander scale, Krueger decided that the new unit would be created from the 98th Field Artillery Battalion…thus making the 6th Rangers the only World War II Ranger Infantry Battalion to carry the lineage of a previous unit.

To command the new unit, the general selected Lieutenant Colonel Henry A. Mucci. On 25 September, the 98th Field Artillery Battalion was redesignated and reflagged as the 6th Ranger Infantry Battalion. Men who did not want to be Rangers were encouraged to transfer to allow the unit to be manned exclusively by volunteers. Those who remained underwent a rigorous training program similar to the one that Darby’s Rangers had undergone.

The 6th Ranger Infantry Battalion’s initial baptism of fire was the invasion of the Philippines. Starting on 17 October 1944, three days prior to the actual landings on the main island of Luzon, the 6th Ranger Infantry Battalion landed on three strategic islands that guarded the entrance to Leyte Gulf to destroy Japanese communications facilities and weapons emplacement.

American and Allied POWs had been on Krueger’s mind for a long time. Aware of a POW camp at Pangatian, five miles east of Cabanatuan and thirty miles behind enemy lines, Krueger directed Mucci to liberate the camp.

Both Alamo Scout teams departed the base camp on the afternoon of 27 January. Mucci’s force departed its base camp at Calasiao at 0500 on 28 January by truck. At 1945 on 30 January, the assault on the compound occupied by nearly 223 enemy soldiers was initiated. By 2030, the compound had been overrun, POWs secured, and the force withdrawn. Blocking forces holding off determined Japanese assaults by an eight-hundred-man infantry battalion, were finally able to withdrawal by 2200 without having sustained a single serious casualty.

A total of fifty-one carts carrying the seriously weakened former prisoners stretched along a column a mile and a half long as the force worked its way back to the safety of friendly lines. Finally, at 1100 on 31 January, contact was made was Sixth Army elements.

The Cabanatuan prison camp raid was an overwhelming tactical success. The raid liberated 511 American and Allied POWs and resulted in an estimated 523 Japanese casualties at a cost of two Ranger KIA and ten WIA. General Douglas A. MacArthur stated that the raid was “magnificent and reflect[ed] extraordinary credit to all concerned.”

The Cabanatuan prison raid proved to be the 6th Ranger Infantry Battalion’s one and only major combat operation. For the remainder of the war, the battalion was relegated to providing security for Sixth Army headquarters, conducting reconnaissance patrols, searching for Japanese stragglers, and eliminating small pockets of enemy resistance. On 15 September, it deployed to serve as part of the occupational forces in Japan. The 6th Ranger Infantry Battalion was inactivated 20 December 1945 in Kyoto, Japan.