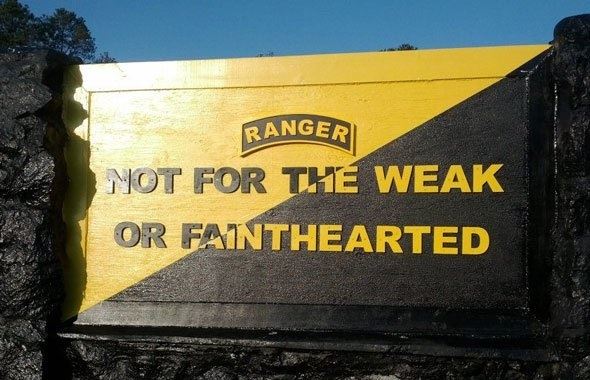 After the train had been captured by 150 Boers, the last four men, though completely surrounded, and with no cover, continued to fire until three were killed, the fourth wounded. On the Boers asking the survivor the reason why they had not surrendered, he replied, “Why, man, we are the Gordon Highlanders.”

For more than two hundred years, U.S. Army Rangers have earned their unrivaled reputation as the world’s premier warriors with bravery, blood, and sacrifice. They are among the most elite, if not the most elite, combat soldiers in the world. Being a Ranger is a function of attitude and a state of mind, as well as a matter of skills and training, and it is the mission of the US Army Ranger School to bring all of these attributes together.

To begin with, one has to be an excellent soldier to attend this course. Just being physically tough does not do it. One must be mentally tough, also. The physical demands, unrelenting pressure, psychological stress, minimal food and rest will either break the Ranger student and make him quit or forge a significantly more confident and capable combat leader.

The Ranger School course of instruction is a handshake with reality, a rite of passage. It is a fraternity initiation…an initiation into a highly select band of warriors within the profession of arms that only a select few will attempt to join?with even fewer meeting the standard for inclusion. It will build and mold soldiers?tough, resolute soldiers who will be hard physically and even harder psychologically. It will never graduate a large percentage of those who attempt the challenge, for the course is too long and too hard for all but the most tenacious and resolute.

On average, only 3,000 soldiers are offered the opportunity to earn the Coveted Black and Gold Ranger Tab…as the Ranger Instructors are prone to refer to the qualification. Of those Ranger candidates who begin the grueling nine-week course each year and who are presumably ready for the challenge, less than half graduate. Of the half who graduate, half of them will have repeated one of the course’s three phases. Statistically speaking, in the end, only 25% of those handpicked to attend actually complete the course on the first try.

The Coveted Black and Gold chronicles the Ranger School experience of a United States Military Academy cadet during Ranger Class 10-80. In June of 1980, a total of sixty-one cadets from West Point Class of 1982 entered this Ranger class. On 31 July, only thirty-nine of those sixty-one Ranger candidates graduated-a passing rate of 64%.

Little has been written about the course itself, much less the actual day-to-day experiences of a Ranger student. From that perspective, alone, The Coveted Black and Gold is exceptionally unique, for it is the only book or record of the daily struggle and challenge of one of the world’s toughest military training schools.

In that I have captured the experience chronologically, to include hours slept and meals consumed each day, I have elected to maintain my notes as a daily journal rather than convert it to a more traditional novel format. For the most part, journals are written in narrative, story form. But most of these journals cover non-replicable events, such as war. Ranger School, on the other hand, is a replicable event. For fourteen classes a year, the same events occur on the same days, relatively speaking.

To those who have experienced the course and to those who aspire to it, the reason for this chronological approach will become quite clear as you read of the experience. Ranger School is a journey that must be taken one day at a time. Though the timing for some of the events may have changed over the past number of years, the experiences themselves have not. It is the cumulative effect of each of those days, the arduous work, the deprivation, the misery, that lead to what is ultimately called the Ranger School experience. Ranger School is a structured series of events that earns one the right and privilege to be awarded the Ranger Tab, to be worn with pride on the left shoulder of a soldier’s uniform. To remove the structure, to remove the sequence of those events, to remove the daily entry of meals eaten and hours slept would seriously diminish and distort the view of that experience.

There are two reasons why this first-hand account exists. The first reason was merely a matter of survival. I made entries each day in an attempt to remain awake during low levels of intensity…usually while sitting in a patrol base. The second reason was to chronicle an exclusive, and what I thought would be a once in a lifetime, experience. While I was not always successful at the first…as my journal will attest, I was on target with the second. No part of this work is contrived or fiction. I have attempted to remain true to the original entries hoping that the actual words written at the time will convey some sense of the experience. The only literary license I have taken is to expand in some areas of the journal to explain events in further or clearer detail.

To those seeking to understand what Ranger School and being a Ranger are all about, I hope this work will assist you to some degree. Beware, though, of the following two caveats. While certain leadership techniques work for some people, the same techniques may not work for others. As you read this memoir, you will note that there are some rather unorthodox…for the lack of a better term…methods that worked for me. They may not necessarily work for anyone else, and they may not have been the best techniques for me to use at the time. One key to being a successful leader is the ability to identify those techniques that will work for you. Do not attempt to be someone you are not. Take the best you see in others and make it a part of your leadership philosophy. If it isn’t your style, don’t force it.

The second caveat is to forewarn you that there is no ‘cookie-cutter solution’ to Ranger school. This memoir is nothing more than that-a memoir. One Ranger’s experience that is the same or similar to thousands of others. The only difference between anyone else’s experience and mine is the fact that I recorded them. There are no secrets to reveal. This journal describes what Ranger School is like. To travel this road as I did does not guarantee success, for this journey is based much more on who you are than on what you know.

For those who are graduates and who already proudly wear the Coveted Black and Gold, these entries may help clear the haze that has hindered your ability to recall many of your own Ranger School experiences, thus bringing to mind a number of forgotten stories and anecdotes. For many of you, you will only need to change the names and the dates to read your own similar story. For those who desire to attend and earn the Coveted Black and Gold, I hope this chronicle vicariously provides you with a view of what it will take to earn that precious strip of colored cloth.

Read about the standards of the different phases of Ranger School, and the experiences of a student going through the school.

75 Years Ago Today. The Raid at Cabanatuan, Philippines
364 views