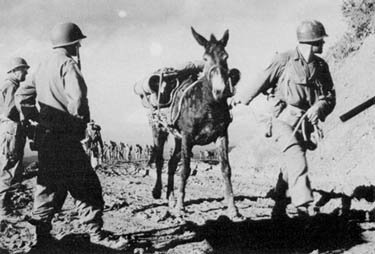 A seventh Ranger-style unit was never officially designated a Ranger Infantry Battalion but it certainly had the earmarks of one. In September 1943, as the result of the Quebec Conference of August 1943, the United States agreed to the formation of a long-range penetration unit to spearhead the Chinese Army in the Burma area of operation. Activated on 8 January 1944 as 5307th Composite Unit (Provisional)…code name Galahad…the unit, better known as Merrill’s Marauders in honor of its commander, Brigadier General Frank D. Merrill, was a regimental-sized unit organized and trained for operations deep behind enemy lines in Japanese-held Burma. They were the first U.S. ground combat force to meet the enemy on the Asian continent in the Second World War.

A call for volunteers for “a dangerous and hazardous mission” brought a response from more than 2,900 soldiers. Preliminary training was secretly conducted in the jungles of India starting in early November 1943. The unit departed from India for Ningbyen, Burma, in late January and marched the final 150 miles to arrive 21 February. From this march was coined the name “Merrill’s Marauders.”

The Marauders were especially noted for their ability to quickly move over seemingly impassable terrain. Organized into three battalions, two teams each battalion, for a total of six combat teams of four hundred men each, and a rear echelon logistic headquarters of six hundred men.

The Marauders began a series of operations on 24 February against Japanese units, supplies, and lines of communications designed to recover northern Burma. Advancing along the Ledo Road, the unit conducted numerous raids against the enemy. In five major and thirty minor engagements, they marched over 1,000 miles through extremely dense and almost impenetrable jungles and defeated the veteran soldiers of the Japanese 18th Division…conquerors of Singapore and Malaya. As effective as they were in their missions, however, the Marauders’ casualties mounted as the enemy and disease took their toll.

The Marauders continued their operations and attacked an airfield at Myitkyina on 17 May 1944. Moving quickly, the force surprised the Japanese and seized the airfield in a daring and brilliant daylight attack. Unfortunately, the assault against the town itself met heavy resistance that dragged on for months. Under siege, the town of Myitkyina finally fell on 3 August.

Galahad’s accomplishments had been achieved at a horrendous human cost. Out of the original fighting force of 2,830 officers and men who set out on their first mission on 24 February, only 1,310 of them reached the objective at Myitkyina airfield. By the time the town itself was taken, Merrill’s Marauders had been reduced to some two hundred undernourished, diseased, and exhausted men. Merrill himself had been evacuated a few weeks earlier after a heart attack.