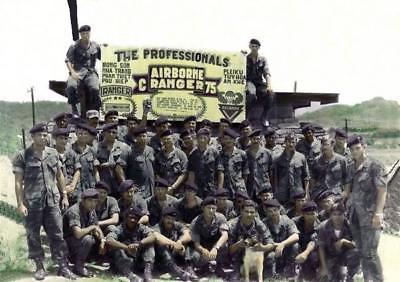 As the Cold War lengthened in the late 1950s, NATO nations felt there was a need for small units to conduct passive, deep penetration intelligence gathering missions at corps levels and higher. From this need was born the Long Range Patrol (LRP) or Long Range Reconnaissance Patrol (LRRP) unit…both LRP and LRRP designations were used similarly and considered interchangeable, trained and equipped to infiltrate enemy lines by ground, air, or water. From well-concealed observation posts or as a function of point, area, or route reconnaissance, they were intended to report enemy movements. Stealth and reconnaissance were the mission of the LRRP, not direct combat. Ultimately, these LRRPs would lead directly to the Ranger companies of Vietnam.

In support of U.S. military operations in Vietnam, units designated as Long Range Reconnaissance Patrols (LRRPs) were officially sanctioned and authorized. Field forces and division-sized elements activated an Infantry Company (LRP). Each company had a total of 118 soldiers assigned with a headquarters section and two reconnaissance platoons with eight six-man patrols. Two of the companies, Company E of the 20th Infantry Regiment) and Company F of the 51st Infantry Regiment, were each nearly twice the authorized strength at 230 soldiers and four reconnaissance platoons.

Separate brigades activated infantry detachments (LRP). These detachments had a total of sixty-one soldiers assigned with a large headquarters section and a single reconnaissance platoon. Eventually, eleven companies…this number does not include Company E, 30th Infantry Regiment, that was used as a training resource in Support of the Aviation Center and School…and four detachments…this number does not include the 70th Infantry Detachment that was deactivated in Hawaii prior to the 11th Infantry Brigade’s deployment to Vietnam with the 23rd Americal Division…were activated and deployed with combat units.

Unfortunately for the LRP units, even though they would eventually become the founding units of the Rangers, there initially was no heritage or lineage to bind the separate companies and detachments. In that the Special Forces, having been without a lineage since its formation in 1952, had been granted the lineage and honors of the 1st through 6th Ranger Infantry Battalions, 1st Special Service Force, of the Second World War on 15 April 1960, the 75th Infantry Regiment with the lineage and honors of Merrill’s Marauders and the 475th Infantry

Regiment was selected as the lineage for the new LRRP organization.

The Ranger companies in Vietnam were deactivated during the period 1969 to 1972 as the units they were attached to were deactivated or returned to the United States as part of Vietnamization, though Company O (Arctic Ranger), 75th Infantry Regiment would be reactivated in 1970 for duty at Fort Richardson, Alaska, for a short period of time.

In 1960, counter-guerrilla forces of South Vietnamese Army light infantry Ranger companies were created. Referred to as Biêt-Dông-Quân or BDQ, a significant number of Ranger-qualified officers and NCOs served as advisors to the Army of the Republic of Vietnam Ranger units throughout the duration of the war…nearly in 2,000 total.

Though they were suppose to operate only in an advisory capacity, there were those situations that thrust some Ranger advisors to the forefront. On 4 April 1970, Sergeant First Class Gary L. Littrell found himself the only unwounded American Ranger advisor left after a surprise mortar barrage by the 28th North Vietnamese Regiment struck the 23rd ARVN Ranger Battalion in their defensive positions on top of Hill 763 in Kontum Province. An attempted helicopter extraction of the wounded Americans by Littrell failed as the helicopters could not penetrate the small arms fire to land near the Ranger NCO, who was standing in the open, exposed, holding a strobe light. Securing the wounded, Littrell proceeded to direct close air support throughout the night and into the next morning.

The light of dawn was met with another heavy mortar barrage against the besieged RVN battalion. Littrell moved about the perimeter administering first aid, directing fires, and moving casualties. A resupply helicopter was able to make it into the LZ around 1000. Littrell loaded the three wounded American Ranger advisors on board along with some ARVN Rangers as another American Ranger, Specialist 5 Raymond Dieterle, disembarked from the helicopter with ammunition.

For the remainder of the day, the two Ranger advisors moved about the perimeter, calling in air strikes, adjusting artillery strikes, and encouraging their South Vietnamese Ranger compatriots. The pressure against the perimeter grew along with the night. Sapper probes were driven back by indirect, aerial, and small arms fire.

The morning of 6 April opened with a North Vietnamese Army (NVA) attack that was repelled. Throughout that day, the NVA continued to rain heavy weapons and mortar fire down on the beleaguered force while the two American Rangers continued to make their rounds of the perimeter, shoring up the Vietnamese’s spirits. At 0630 the following morning, another firestorm of explosive volleys swept the hilltop. A massed assault staging in the woods was met by helicopter strikes directed by Littrell at the point of attack. Despite the air strikes, the human-wave attack a half hour later nearly breached the perimeter. Only a stoic defense by the fatigued defenders and the advisors’ bravery repelled the charge.

The Rangers were able to hold against a series of attacks that night. Finally, at 1030 on 8 April, the depleted and exhausted battalion was ordered to withdraw down the hill, through the jungle, across the Dak Poko River, to reach the 22nd ARVN Ranger Battalion. The two Ranger advisors set about organizing the movement, redistributing ammunition, and seeing that the dead and wounded were brought along.

The battalion moved out at 1100, under the command of the dazed ARVN battalion executive officer who proceeded to move down the wrong spur of the hill…despite the warning of the two American Rangers…and closer to the enemy position. At the bottom of the hill, the executive officer incredulously halted his formation for a five-minute tea break.

Immediately, the battalion was inundated with mortar fire. Littrell was able to establish radio contact with the 22nd ARVN Ranger Battalion and direct counter-fires against the enemy mortars. Requests for gunship support brought the word that none was immediately available, which prompted the battalion executive officer to panic and run. Seeing their commander flee, the remainder of the South Vietnamese Rangers began to scatter, leaving their dead and wounded behind.

With a “Come on, partner, let’s hat up,” Littrell grabbed Dieterle and slowly gathered up the dispersed Rangers. With the remnants of the battalion regrouped, the two Rangers proceeded to lead the formation through the jungle for several hours toward the proper objective. As the North Vietnamese pursued, the Rangers directed mortar fires “danger close” to keep the enemy at bay. During the repulse of one assault, Littrell and his partner were knocked to the ground by the force of 500-pound bombs the senior Ranger had called in nearby.

Directing the fight through two ambushes, the Americans continued to lead, cajole, and drag the ARVN soldiers along. At the last ambush site, Littrell stopped to assist three wounded Vietnamese Rangers. Carrying the most seriously wounded one on his back, Littrell ended up dragging the other two behind him and across the Dak Poko River as they held on to his web gear and were led to safety by Littrell with the remainder of the battalion.

Total losses for the ARVN Ranger Battalion were 218 casualties and nineteen MIA. For conduct above and beyond the call of duty, Sergeant First Class Gary L. Littrell was awarded the Medal of Honor.

By the end of United States involvement in Vietnam in 1973, Companies A and B of the 75th Infantry Regiment were the only two active duty Ranger/LRRP companies still in existence.