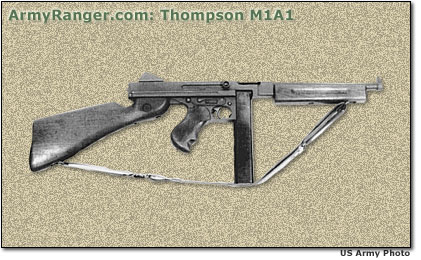 There is one weapon that can definitely be called a gun of the Twentieth Century, and that's the sub machinegun. It was born out of desperation during WWI by German engineers that wanted to break the trench stalemate. They decided they needed a new type of weapon for close quarter battle. First, it would have to be smaller and lighter than a conventional rifle. Second, it would have to fire a common pistol round. Third, it needed to be fired from the shoulder or the hip. And fourth, it needed to fire full automatic using a blowback action. This is still the criteria in defining bullet squirters to this day.

The Thompson was one of the first SMGs made in the US.. It didn't appear until well after WWI. It went into series production in 1928 and remained in production as a first line weapon until 1944. The early models of the Thompson used a Blish hesitation lock which helped make the gun a delayed blowback weapon. At that time, there were even larger capacity 50 or 100 round drum magazines available. The wooden butt stock could be detached if necessary to make the gun even shorter. The weapon soon gained notoriety with organized crime and was known as the Tommy gun or street sweeper. In the early days of WWII, the US needed a faster and cheaper method to manufacture the Thompson. In 1942 the M1 model appeared with fewer designs. There was no more detachable butt stock, Blish lock, and other features that were costly and timely to make, including the fitting for larger drum magazines. The gun was modified again later that same year and became the M1A1. This is the model that was used by Rangers through the end of WWII.

The Thompson was heavy but it also had a reputation for being very effective. It was used by Rangers in Korea and put back into storage. During the early Vietnam years, the Thompson was dusted off and once again put back into service. Not only did US soldiers use the Thompson in Vietnam, but they encountered it as well. A number of them were made in small jungle workshops in North Vietnam. The Thompson is still in use worldwide especially with guerrilla forces.