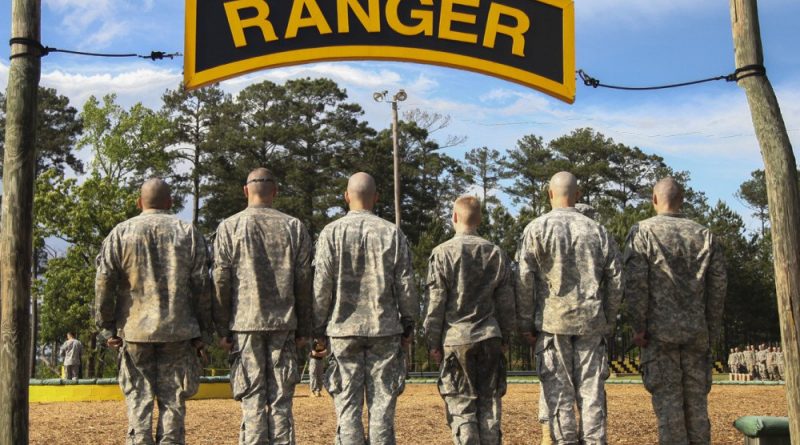 To bring about this formation, the Ranger Training Center was established. The Ranger Training Center began operating on 2 October 1950, when it initiated training for the first four Airborne Ranger Companies to be trained there. The Ranger recruits were placed through an intense and extensive training cycle that included small unit tactics, demolition training, cold weather training, mountaineering, low-level parachute jumps, and river-crossing operations. To replicate realistic combat conditions, the training was designed to be extremely stressful by limiting food and sleep and by conducting continuous operations, normally at night.

The first four Airborne Ranger companies to graduate from the intensive six-week course established by the Ranger Training Command did so on 13 November 1950. At their graduation, the Rangers were awarded a small, yellow on-black RANGER arc tab insignia to be worn on the left shoulder of their uniform. Though the yellow color of this tab would eventually be changed to gold and later become coveted and recognized by military units worldwide, most of the early graduates were disappointed. They had expected a white and red on black insignia similar to the scrolls of the World War II Ranger Infantry Battalions. Consequently, many Korean War Ranger veterans purchased copies of the Second World War Ranger Infantry Battalion scrolls, removed the letters BN, then sewed in white thread the letters CO. It was this modified scroll that many of the early Ranger School graduates wore on their uniforms.

Note: Today, the Ranger scroll is worn by members of the 75th Ranger Regiment. For all soldiers who have graduated from the U.S. Army Ranger School, the black and gold Ranger Tab is awarded to be worn on the left shoulder of each graduate’s uniform.

Fourteen Department of the Army authorized Ranger Infantry Companies (Airborne)…in addition to two TDA Ranger companies in Korea…were eventually formed between August 1950 and February 1951. In due course, six of those TO&E; Ranger companies were attached to six divisions within the Eighth Army during the Korean War.

The 1st Ranger Infantry Company (Airborne) entered the war executing a daring feat of land navigation when it penetrated nine miles behind enemy lines to destroy an enemy complex that was later identified as the 12th North Korean Division headquarters.

Ranger Training Command retained the remainder of the 3rd Ranger Company at Fort Benning, where it was refilled with replacement volunteer parachutists from the 11th and 82nd Airborne Divisions to begin training a second time with the second cycle of four companies: 5th, 6th, 7th, and 8th Companies. With the six-week course expanded to eight weeks, this cycle of Rangers began their training on 26 November. Completing the regularly scheduled training on 13 January 1951, these companies were required to undergo an additional four weeks of mountain and winter warfare training at Camp Carson, Colorado, immediately following their Ranger graduation. Some companies were even required to conduct an additional third phase of training at Eglin Field, Florida, following Camp Carson.

The arrival of the second Ranger cycle in late February found the potential for two Ranger companies to be assigned to the 25th Infantry Division…its Table of Distribution and Allowances unit, the Eighth Army Ranger Company, and the 5th Ranger Infantry Company (Airborne), authorized in accordance with Department of the Army TO&E.; In that only one Ranger company per division was authorized to draw jump pay and most members of the Eighth Army Ranger Company were not jump-qualified, the decision was made to disband them on the 28th of March 1951.

Having endured Ranger School for two complete cycles of training, the 3rd Ranger Infantry Company (Airborne) was assigned to the 3rd Infantry Division during the first week of April 1951. Its initial introduction to combat was a true baptism of fire when it fought hand-to-hand through the Chinese trenches to capture “Bloodynose Ridge.”

By July 1951, the situation in Korea had stabilized to the point that major commands felt there was no longer a need for so specialized a force as the Rangers. Though the final Ranger company was deactivated 1 December 1951, the U.S. Army command saw a continuing need for Ranger training. In January 1952, the Ranger Training Command that had been established for the Korean War was inactivated and immediately reconstituted as the Ranger Department of The Infantry School (TIS).

A ‘birth’ that began with the Korean Conflict was the Ranger “Black Beret.” Conceived of in 1951 by then Captain Charles “Pete” Spragins, commander of the 10th Ranger Infantry Company (Airborne, while training with the 11th Ranger Infantry Company (Airborne) at Camp Carson, Colorado, the beret’s color was symbolic of much of the Ranger training and combat which took place in the hours of darkness. The Ranger Training Command at Fort Benning, Georgia, evaluated and endorsed the black beret for Ranger use but its official authorization in accordance with regulations by the Department of the Army would not be forthcoming for more than another two decades.