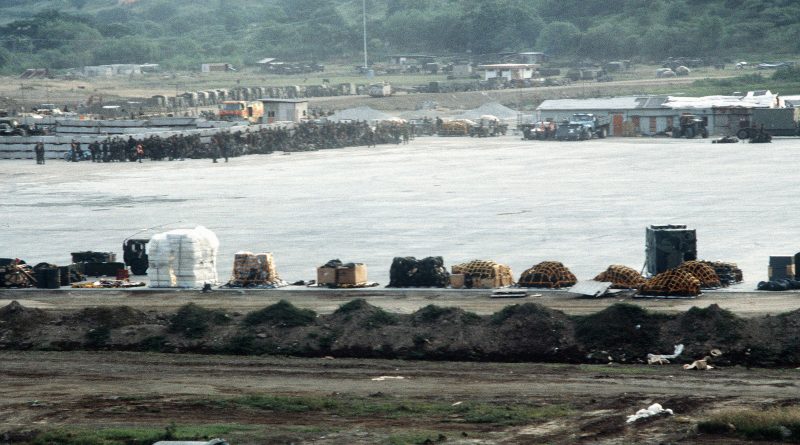 On 25 October 1983, United States Army Rangers, as part of a seven-nation task force, led the invasion of the tiny Caribbean island of Grenada. The Executive Order to execute Operation Urgent Fury was issued at 1654 on Saturday, 22 October. In that the Ranger Battalions specialized in airfield seizures…”takedowns,” the 1st Battalion was assigned the Point Salines Airfield and the securing of the True Blue medical school campus occupied by U.S. citizens at the eastern end of the runway. The 2nd Battalion was assigned the mission of taking Pearls Airport.

Little was known about the enemy they faced, no tactical intelligence, or details of locations. Military maps of the island did not exist and much of the planning was based on an old, outdated British 1:50,000-tourist map of the region. Black and white photocopies of this map were distributed for planning purposes.

The defending force was called the PRA and was believed to be 1,200 strong with an additional 2,000 to 5,000 militia and 300 to 400 armed police to draw on. Soviet antiaircraft 12.7-mm machineguns and eighteen ZSU-23 37-mm cannons were in the inventory, as were eight BTR-60 Armored Personnel Carriers (APC). There were a small number of 75-mm antitank recoilless rifles and 82-mm mortars.

From both Ranger Battalions, 600 Rangers would land or drop, depending on the conditions encountered at the airfield on Salines. 1st Battalion, in addition to securing the airfield and True Blue, would also reinforce the sixty Special Operations soldiers in the St. George area of operations with fifty to sixty Rangers while the 2nd Battalion would attack the PRA base at Calivigny. H-Hour was set for 0200 on 25 October though this would be changed the very next day to 0500 on 25 October.

At 2130 on 24 October, the first MC130s carrying Rangers took off. A half-hour after departure, the Rangers were informed that the runway was definitely blocked. By 0400, the order was given that all Rangers were to chute-up for a jump. With only an hour left until H-Hour, the Rangers hastened to perform and in-flight rigging.

As a consequence of the MC-130 problems, H-Hour was pushed back thirty minutes to 0530. It was 0531 when the lead Ranger aircraft began the final approach. Almost daylight, the sky was partly cloudy and the winds were a windy twenty knots. From an altitude below the minimum safety altitude of 500 feet AGL, the first Rangers exited on the green light at 0534. A 12.7-mm four-barrel antiaircraft machine-gun opened up, spewing green tracers across the sky. Aircraft and pilot difficulties prevented the final 1st Battalion Ranger from dropping until 0705. Minutes after the 1st’s last pass, the 2nd Battalion (Ranger) arrived overhead in a tight formation to jump into space at 0707. By 0710, the 2nd Battalion (Ranger) was on the ground.

On the ground, the 1st Battalion (Ranger) moved out to conduct its missions: securing the True Blue Medical School campus, the airfield’s control tower and the hills beyond the terminal, and the village of Calliste. Because of the nature of their drop, the 2nd Battalion (Ranger) were able to assemble quickly and, having met little resistance, were able to briskly clear the runway area west of Hardy Bay, clear the narrow strip of land south of the runway towards Point Salines, and secure the low hills from the north down to Canoe Bay. Unfortunately, however, because of the lateness of the drop, their mission to attack the PRA base at Calivigny would not occur that day.

Elsewhere, C Company, 1st Battalion (Ranger) had been tasked to air-assault with Delta team members to secure Richmond Hill Prison commencing at 0530 that morning as a part of a Special Operations mission.

The Government House operation also provided a few dicey moments with the SEALs having to undergo a siege for nearly a day. They were eventually able to secure the facility the following morning having suffered no injuries to the team members.

The same could not be said for the prison raid where all hell was breaking loose and nothing was going as planned. For starters, the location of the prison and the terrain surrounding it was not as briefed. The prison had been constructed on the spine of a high ridge with vertical slopes covered with dense foliage. Walls at least twenty feet high and topped with barbed wire and watchtowers encircled the compound. The only way into the prison was for the Black Hawks to hover over it and allow the Rangers to fast-rope in.

Unfortunately, there was one unanticipated dilemma that made such an approach exceptionally dangerous. Unknown until their arrival at the prison, there was a fort, Fort Frederick, which sat on a ridge only 300 meters across the valley to the east. The ridge was higher and the fort dominated the prison below it by at least 150 feet. And, in actuality, it was not the fort itself but the two antiaircraft guns within it that would make life for the airmen, Rangers, and Delta miserable. The prison, itself, was a tough enough objective to get into without the over-watching…and unanticipated…heavy weapons.

Flying in low over the valley, looking for anywhere safe to put the ground forces down, the Black Hawks were easy targets as the fort’s guns fired either level or from above the aircraft. Unescorted and with Spectre AC-130H gunships engaged elsewhere with the commencement of the invasion, the small force was on its own. As the pilots attempted to evade the fires and locate a place to put the force down, bullet holes appeared through the aircraft’s fuselage, striking both troops and crew, splattering blood and bone everywhere. After the first run through the valley, the flying machines were holding up better than the wounded men they carried inside.

On the second run, the pilot of the fourth Black Hawk, Captain Lucas, who had already suffered a wound to the right arm on the first go-around, was killed when five rounds fired from above smashed through the windshield and struck him in the head and chest. Though suffering a grazing wound himself, the copilot, Chief Warrant Officer 2 Paul Price, was able to maintain control of the seriously damaged and burning aircraft.

The assault aircraft scattered with many of the UH-60s heavily damaged and full of wounded men. Price flew south towards Point Salines, escorted by a second Black Hawk, as he struggled to keep the battered helicopter airborne, realizing that to crash-land at sea would probably mean death for many of those seriously wounded in the rear. Unable to maneuver, Price was forced to fly over the PRA base at Frequente. Hit again, the Black Hawk quickly began to lose altitude as the controls locked. The UH-60 crashed around 0640 just on top of Amber Belair Hill with such force that the helicopter broke in half and the main rotor blades fell over the cliff in the water and rocks below.

Moments later, the aircraft burst into flames. Despite the intensity of the flames, the severity of the impact, and the number of machine-gun rounds that had passed through it, all but Lucas survived. Price and the remainder of the crew, Warrant Officer 1 Jon Ecker, Sergeant Gary Minerve, and Specialist 4 Loren Richards, were able to escape the inferno, as were the wounded Rangers in the back.

Concerned for the welfare of approximately 230 American medical students and faculty still unsecured at Grand Anse the next day, the 2nd Battalion (Ranger) was assigned the mission along with Marine helicopters. Nineteen helicopters departed around 1600 to make the short six-kilometer flight. Though there were Marine aviation issues that created difficulties and damaged some helicopters, the Rangers were able to safely extract the American non-combatants.

The final mission left for the Rangers was Calivigny, which they were directed to secure by the evening of the 27th. Intelligence estimates placed the garrison strength at 600. Preplanned naval, close air support, and artillery fires raked the camp before four flights of Black Hawks, each loaded with approximately fifteen Rangers, roared in across the waves and settled for the objective. Pilot error, however, would result in three UH-60s being destroyed within twenty seconds and without a shot being fired. Worse yet was the fact that three exposed Rangers from one of the flights were killed and another four seriously wounded.

Despite the death and destruction about them, the first lift of Rangers regrouped and continued their mission as the remaining lifts of Rangers safely touched down to conduct theirs. A sweep of the camp resulted in the discovery of no enemy bodies or wounded. The travesty of it all was that the mission had been all for naught.

The two Ranger battalions redeployed to their home stations on 28 October.