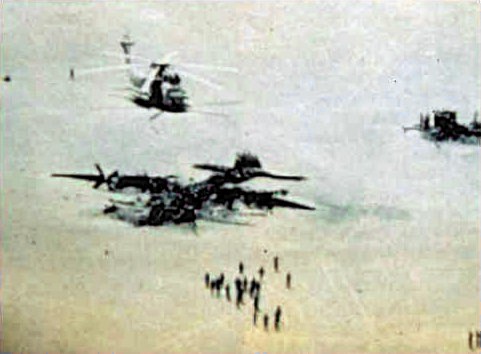 Denigrating the U.S. as the “Great Satan,” a mob of militant followers of the Ayatollah Khomeini stormed the American Embassy in Tehran on 4 November 1979 and took sixty-six Americans hostage. Finally, it was determined that it was a matter of national honor as well as moral and political obligation to conduct a military operation to rescue the remaining fifty-three captives. The mission went to Colonel Charlie A. Beckwith. A veteran of Korea and Vietnam, “Chargin’ Charlie” was a hardened Green Beret and Ranger who was considered to be the premier U.S. expert in unconventional warfare.

Colonel Beckwith was commander of 1st Special Forces Operational Detachment-Delta (1SFOD-D) more commonly referred to as “Delta Force,” a secret…at the time…elite team of commandos who were specifically trained in a number of anti-terrorist tasks, one of which was to surreptitiously infiltrate target areas dressed in civilian clothes and free hostages from buildings.

On 11 April 1980, President Carter authorized the rescue mission to be conducted thirteen days later, on the 24th. The mission called for a group of 130 Delta, Rangers, drivers, and translators to be inserted into the Iranian desert by a support force of fifty pilots and air crewmen. Six C-130 Hercules transports were to lift the men, their equipment, and helicopter aviation fuel from the Egyptian air base at Qena to the island airfield of Masirah off the coast of Oman for a refueling stop.

From there, the force would fly to a secret landing strip in Iran, designated “Desert One.” Located 265 nautical miles from the hostages held in Tehran, this site would be secured by the Rangers. Eight Sea Stallion RH-53D helicopters launched from the aircraft carrier U.S.S. Nimitz on station in the Arabian Sea would join them.

Refueled at Desert One by C-130s carrying fuel bladders, the helicopters would depart prior to dawn to transport the assault force of 120 men to a remote mountain hideaway designated “Desert Two” located fifty miles from Tehran. After their departure, the remaining Ranger security element and aircraft would sterilize and depart Desert One and return to Qena.

Later that evening, the commandos would clandestinely depart Desert Two and drive in vans and trucks to Tehran to storm the American Embassy compound at around 2300 to free the hostages. Approximately forty minutes after the assault commenced, the helicopters would arrive from their hide site, about fifteen miles from Desert Two, to load the freed hostages and the commando force either in the vicinity of the embassy compound or a nearby soccer stadium.

Two AC-130H Spectre gunships would be on station overhead to interdict any Iranian mobs on the ground and to prevent any Iranian Air Force aircraft from taking off at a nearby airfield.

As the assault was commencing by the Delta team at the embassy compound, eighty Rangers would be airlifted from Qena to an isolated desert airstrip at Manzariyeh. Located thirty-five miles south of Tehran, this airstrip was part of an unoccupied former bombing range and had an asphalt paved runway that would be secured by the Rangers and used by C-141 Starlifters. Withdrawing from the embassy compound to the airstrip by helicopter, the Delta commandos and hostages would load the Starlifters. Then they, along with the helicopter crews, drivers, translators, and DOD agents…select individuals who were operating in Tehran in support of the rescue attempt…would depart for Qena, mission complete.

Once the other elements were lifted out, the Rangers would collapse their perimeter and fly out themselves. Delayed demolition charges would ensure the destruction of the helicopters left behind.

At least, that’s how the plan was to work in theory. After a couple of false starts, the mission was launched from the United States on 20 April. On 24 April, the majority of the ground force, to include a detail of Rangers from C Company, 1st Battalion, 75th Rangers, boarded two C-141s and flew to Masirah Island. Later that evening, they departed for Desert One.

At 1930 on the deck of the aircraft carrier U.S.S. Nimitz, eight Sea Stallions crewed by Marines rose in formation and began their fateful six-hundred-mile flight to Desert One under radio listening silence. Maintenance problems caused one helicopter to be abandoned along the way and a second to abort and return to the Nimitz. The mission was now down to the minimum number of helicopters Beckwith thought necessary to accomplish the mission.

At Desert One, Rangers deployed to establish security and a road watch while Delta support personnel prepared to receive the soon to be arriving helicopters. The Ranger road watch team had no sooner off-loaded a jeep and spread out when a large Mercedes bus drove up to the field. Stopping only after shots were fired over the bus, the forty-five distressed Iranians were unloaded from the bus and secured.

Minutes later, another approaching vehicle was spotted, a small fuel truck. Failing to halt, the vehicle was set afire by an antitank rocket fired by a Ranger. Quickly exiting the burning truck, the driver ran a hundred yards back to a pickup that had moved into the perimeter undetected. In a blaze of rubber and tossed sand, the pickup with its two passengers escaped in a hail of bullets.

The last two helicopters arrived at Desert One, nearly an hour and a half late. But, with their arrival, the mission’s fate had been sealed, for one of the last two aircraft had sustained a crippling mechanical malfunction. With the mission now down to only five operational helicopters, the mission was aborted.

The task then at hand was to close up Desert One and get everyone safely back to Egypt. At approximately 0200, while maneuvering to top off with fuel from a C-130, a Helo pilot became disoriented in the great swirls of dust created by his engine and that of the C-130. Moving left, then right, the helicopter banked and crashed into the refueling C-130, creating a mammoth fireball in the desert night that caused fuel and debris to rain all about.

From the side troop doors of the stricken C-130, thirty-nine soldiers tumbled or were carried out while other soldiers risked their lives to rescue several unconscious men trapped on the ground near the raging inferno. The five Air Force crewmen in the C-130 cockpit as well as three Marines in the helicopter perished in the intense flames. Four Army soldiers suffered serious burns.

All helicopters were immediately abandoned and for the entire force of Delta, Rangers, and support personnel to load on the remaining C-130s. Equipment was jettisoned from the C-130s to make room for the extra bodies that had not been originally planned on the manifest. Left behind at Desert One were five serviceable helicopters, weapons, communications equipment, secret documents and maps…as well as fifty-three hostages in Tehran, a nation’s honor, and its pride.