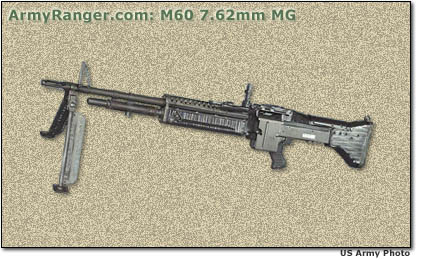 The M60 general purpose machine gun was designed to replace the .30 caliber Browning, and uses the 7.62-mm NATO round. It was used as a powerful fire support weapon at the platoon and squad levels. The M60 is a gas operated, belt fed weapon that is basically a copy of the German MG42. The action is locked using a turning bolt. The barrel can be changed quickly, and it has a bipod integrated into the design. It can be handled and operated by one individual, although it is common to have a team. In each Ranger platoon there were three squads for maneuver and one for fire support; the weapons squad. The weapons squad was comprised of a squad leader and three machinegun teams. The gun teams were each comprised, as they still are today, of a gunner, assistant gunner and, when fully staffed, an ammo bearer. The goal is to have all three members of each gun team be qualified with the gun.

The M60 Machinegun served as the primary machinegun used for dismounted patrolling by Rangers during the Vietnam War. After the formation of the 1st and 2nd Ranger Battalions in 1974, the M60 found an additional role mounted to a pintle on a Jeep, one on a center post pintle and occasionally found on a second location for use by the front passenger. The M60 continued serving the Regiment right through the operations conducted by Task Force Ranger in Somalia, 1993. Thereafter, it was replaced by the M240G Machinegun.

We used the M60 extensively in Central America. We learned the hard way to always have a spare leaf spring since it has a tendency of falling off, along with the trigger mechanism.