Prior to WWI, machineguns were generally wheel-mounted and deployed as light artillery pieces. During the Great War, the armies on both sides began replacing their wheeled-mounts with tripods, and started using machineguns as close support weapons for the infantry.

John Browning developed the M1917, as he did many others. The gun is recoil operated using a barrel and barrel extension that recoil, carrying the breech block. This basic Browning design is found on other weapons made during that era and has been extensively copied. Browning kept two things in mind when he designed a weapon. First, he kept it simple. The fewer the parts, the less that could go wrong. Second, the gun had to be extremely robust, capable of firing reliably under the most extreme conditions from freezing cold to blistering heat.

The M1917 was deployed as a defensive machinegun at the battalion level in WWI, partly because of its weight. Fully operational with the tripod and water, the machinegun weighed ninety-three pounds. Although the weight was cumbersome, it was beneficial in providing stability when firing. With a cyclic rate of 450 rpm, the M1917 had a devastating effect on troops in the open and stopping mass attacks.

After WWII, the gun was updated and could fire at a higher rate, up to 600 rpm. This version was designated the M1917A1 and was used in WWII by Merrill’s Marauders. The M1917A1 was eventually replaced by lighter, air-cooled guns like the M1919 and its variants. The M1917A1 may still be encountered in developing countries. 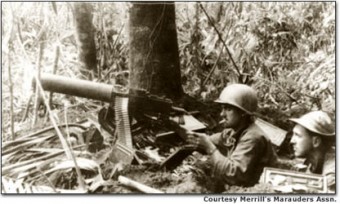