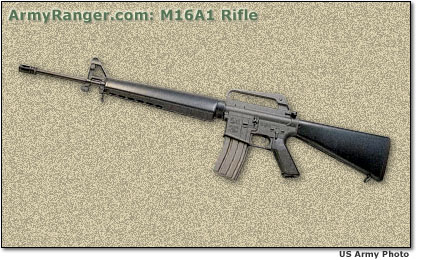 With the success of the M1 Carbine and its smaller round, the US military continued its research into lighter weapons and ammunition. During and after the Korean War, the US Operational Research Office conducted studies on rifle fire in combat. What they eventually concluded is that a smaller caliber round could in fact produce as many casualties as larger caliber rounds. Other benefits they discovered were less recoil, and the obvious benefit of weight. An Army Infantry Board asked Armalite Company to develop a .22 caliber military rifle. The AR15 was developed by Eugene Stoner of the famed Stoner System, firing a 5.56-mm round. It uses a gas return operating system. Gas is tapped from the barrel via a vent and returns through a tube to the bolt carrier. It expands into a chamber which forces the carrier rearward.

It initially ran into extremely heavy opposition, especially by combat vets who compared its Mattel toy-like appearance to that of the durable M14. Somehow the test model hung around and created enough interest that in 1962, the Air Force ordered 8500 and then the Army tested several in Vietnam. By 1963 it was adopted and became known as the M16. As the orders continued, Colt took over as the manufacturer. There were some problems with the type of powder to use and just how much cleaning was necessary for the rifle to work properly. By 1966 the A1 appeared with its positive bolt-closing device to force rounds into a dirty a chamber.

Standard features include a dust-cover which opens automatically when firing, charging, or releasing the bolt. There is a bolt stop which holds the bolt open after the last round is fired, and a trigger guard which hinges down for winter firing. Scopes can be mounted on the carrying handle. Cleaning kits can be stored in the stock of the rifle. The left and right hand-guards seemed to pop off at the most inopportune times exposing your hands to a hot barrel. This was later fixed with the A2 version.

The M16A1 and A2 can be fitted with a bayonet, and the M-203 40-mm Grenade Launcher. Scaled down variants such as the Colt Commando, XM177E2, and the CAR 15 have also been made. These smaller models have been popular with pilots, radio operators, and any unit that fights in close quarters. (Close Quarter Battle). These smaller versions are okay, but it is my experience that they also heat up faster and then you start to experience loading malfunctions.

The M16, M16A1 and A2 have been used by Rangers in Vietnam, Iran, Grenada, Panama, Persian Gulf, and Somalia.