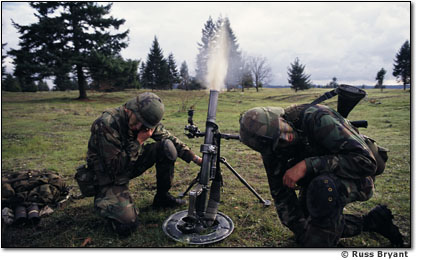 The mortar has been used as a weapon of war for over five centuries. As is often the case, military ingenuity in combat led to the development of a new weapon. In this case, soldiers turned two large guns upside down and used them to propel stone balls onto the decks of ships. Although useful, frontline troops never had any need for these early mortars until WWI. Large, opposing armies were dug in within only a few hundred meters of each other. Infantrymen needed a weapon that could drop a bomb into the trenches and clear them. In 1915, Sir Wilfred Stokes designed a prototype of a mortar that has evolved as the standard used around the world. It is nothing more than a steel tube mounted on a base plate. The muzzle is supported with a bipod, and at the breech end is a firing pin.

The M2 and the M19 were used by Rangers and Marauders in WWII and Korea. They had a range of 1850 – 2100 meters. The M224 replaced these earlier models. At 3490 meters, it can fire a round much farther than its predecessors. The M224 consists of the barrel, combination base cap, and firing mechanism. The mount consists of a bipod with a screw type elevating and traversing mechanism, and a base plate The M64 sight is attached to the bipod mount.. An additional short range sight is attached to the base of the tube for firing the mortar on the move and during assaults. The M224 is ideal for Ranger and Special Operations Forces. It can be drop fired, or trigger fired. A lightweight auxiliary base plate is used when firing the mortar in the hand-held (without bipod) position. The great speed with which a 60-mm mortar system can be brought into action greatly enhances platoon and company sized elements to effectively inflict heavy casualties on the enemy.

The Rangers also employ additional mortar systems which are used for situations where the 60-mm would be impractical due to range limitations and other considerations. The mortar sections employ a wheeled cart to provide mobility to these otherwise bulky and powerful 81-mm and 120-mm mortar systems.

Rangers have used mortar systems, both 60mm and larger, quite effectively in combat, as this account from Richard Tregaskis Invasion Diary so aptly describes CPT Charles Shunstrom putting the 60mm mortar into action against the Germans:

Near me, in a shallow, rocky foxhole, sat Maj. Bill Hutchinson, shouting corrections by phone to his 4.2 mortar batteries near Venafro. He cautioned me sharply against exposing myself in my movements across the ridge.

“We’re within machine-gun range of Mount Corno,” he said.

One of the group of men scattered over the ridge top was Capt. Shunstrom, the same wild man who had operated the mobile artillery so effectively with the Rangers back at Chiunzi Pass. Now he was fiddling with a 6o-mm. mortar tube, preparing to add a few shells to the torrent of explosives falling oil the German positions atop Mount Corno. “Here’s the way to shoot one of these things,” he announced; He braced the base-end of the tube against the ground and gave a demonstration firing the powerful field weapon as if it were a pistol or rifle.

Usually, the 6o-mm. mortar tube, which throws a projectile about two and a half inches in diameter and nearly a foot long, is attached to a heavy base plate when it is set up for firing, with a bipod supporting the tube at the proper angle. A mortar man drops the projectile down the mouth of the barrel and steps back to keep clear of the shell as it speeds from the muzzle. But Shunstrom had his own system. He wrapped the bare tube, without stand or bipod, in an old glove-which would insulate the heat of the barrel-seized the tube with his left hand, aimed it approximately, and dropped the mortar shell down the mouth with his right hand.

His marksmanship was surprisingly accurate. The first burst sprang up less than fifty feet from the top of the white rock at the peak of Mount Corno, and the second blew up on the rock itself. Shunstrom fired ten or eleven shells, three of them landing on the stone, and one close to the cave where the Germans must have been dug in. Shunstrom gave a grunt of satisfaction.

I watched the fireworks: the firing of the heavy mortars which were giving the Germans hell on the far slope of Corno and had set fire to some of the trees there; Shunstrom’s wildcat marksmanship with his mortar; the slender plume of smoke raised by a German hand grenade near the top of Corno. Finally, I saw a great explosion blossoming from the white rock itself-perhaps the detonation of the bangalore torpedoes, or a charge of dynamite. Maj. Hutchinson said, “Great fun, as long as we’re dishing it out and not taking it.”